REGULATION OF ELECTRICITY DISTRIBUTION SERVICES QUALITY: SCADA SYSTEM FOR AUTOMATIC MANAGEMENT, ACCORDING TO THE AUTHORITY DUTIES

Small distribution network operators are often in trouble managing energy interruptions in accordance with the dictates of the Electricity Authority for the 2008-2011 regulatory period.
This article demonstrates how a performing SCADA system with some specially developed tools can make the analysis of the most familiar energy breaks to automate the parameters required annually by the Authority.

Small-scale utilities managing LV and MV distribution networks in Italy are bound by the Electricity Authority to manage the quality of service, both from an electrical and commercial point of view.
The gudelines issued by the Authority, such as 333/07 and 341/07, together with the supplementary notes and technical instructions, provide a set of criteria for cataloging electricity interruptions; the data must then be sent annually to the Authority, which can prove its validity with on-site inspections.
The resolutions passed in 2011 by declarations 198/11 and 197/11 (substitutes for 333/07 and 341/07 respectively) for the new adjustment period 2012-2015 without however changing the technical instructions for calculating interruptions.
To limit resources dedicated to this field, a number of tools have been implemented to include in a SCADA system that facilitates interrupt handling by helping the operator in the aggregation criteria and providing documentation that is compliant with the requirements of competent bodies both for annual communication and for internal inspection.
The annexed system for a utility which manages the supply of electricity in two valleys in Trento region.

The focal point of the process to be monitored is the calculation of unpowered users during the normal and extraordinary exercise of the managed power grid.
All this is done by an automatic algorithm that, starting from information such as:

determines the areas and users for whom the supply of electricity is not guaranteed.
Some of the information above is static or with limited variations over the course of the year - see the layout of the network - while others vary repeatedly even over a single day.
The algorithm must therefore communicate with a data source for the switches positions to be updated in real time - functionality explicitly required by the Electricity Authority - while for the manually operated disconnectors it may be procrastinated for some days.
For this purpose, the tool is backed up to the existing SCADA system with the Zenon software of the Copa Data company, using communication processes with the real-time data monitoring field and using its graphical interface to display both real-time and historian state of the network's power state.

The tool has been used to manage power interruptions in six different municipalities, not connected each other from the electric grid point of view.
All MV networks have a 20kV voltage level, some with internal production, with various interconnections in MV and HV with other power distribution system operator; Currently the number of network users is over 5000. 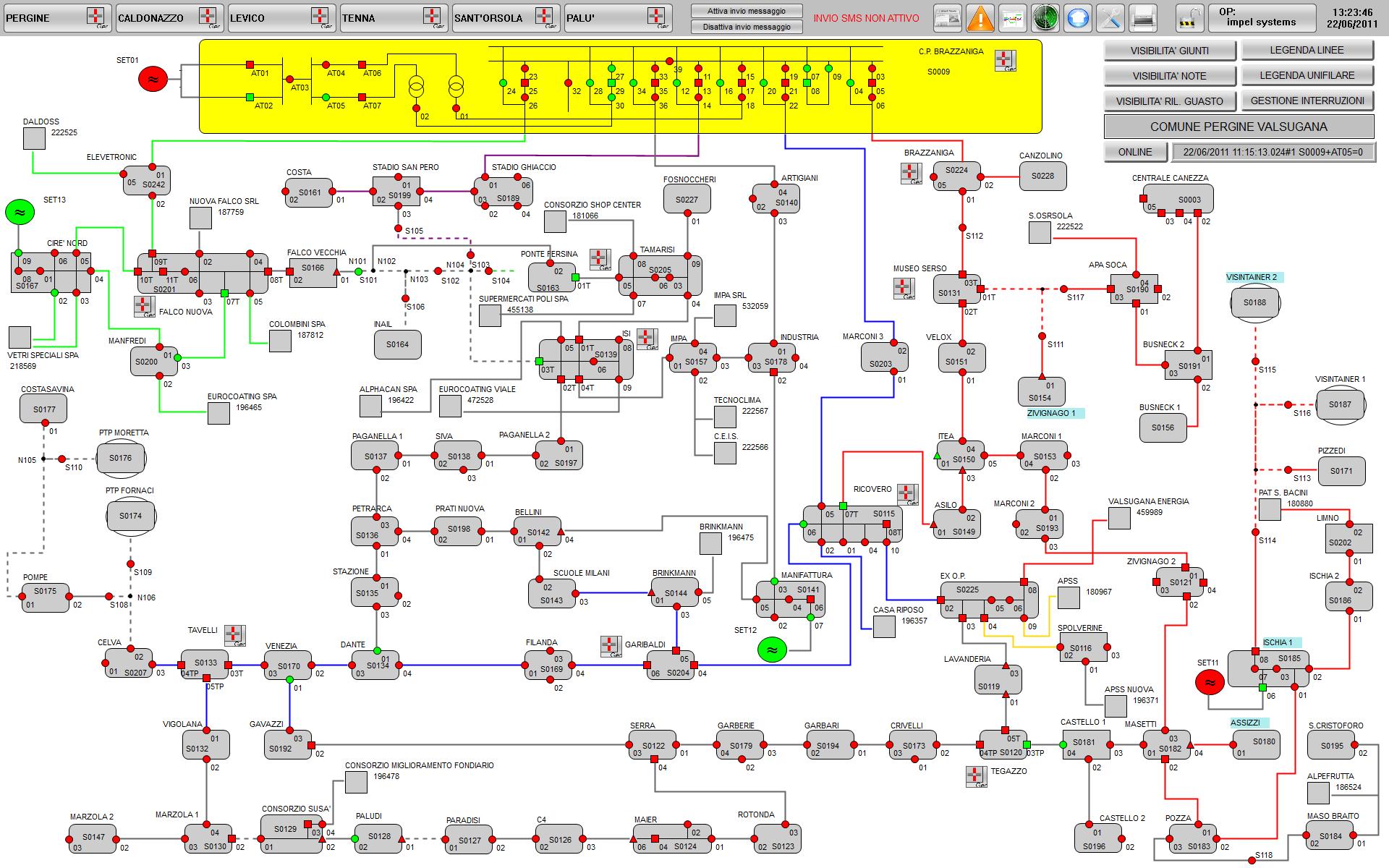 Distribution Network of the Municipality of Pergine Valsugana

We show some characteristic data that confirm the complexity of the system analyzed despite the small geographical area occupied.

Interconnections with other networks:

In both networks there are real-time monitored automatic opening switches and manual operated switches.
The sources and the interconnections are monitored in real time with a control of the supply voltage, considering them no longer active in the case of voltage drop below the limits allowed in the supply of electricity.

All data extracted from the SCADA system is stored in a SQL database, which acts both as a data source for the actual state of the network and for historical configurations.
Calculations are performed on the basis of this database, to obtain user power states, and generation of interrupt reports.
The graphical interface has two operating modes: on-line and off-line. The first highlights the actual state of switches, sources, interconnections and going disruption of users; in the second, the status of the network is displayed at one chosen instant of the archived states.
The color of the cabs, organs, and power sources in the graphical interface is indicative of a state of operation so that the operator can see both the network layout and the power supply status of the entire network.

The software allows the management of an electrical network from sources (generators, interconnection lines, etc ...) to the LV switches in the cabin; In addition, the system allows cab power supplies via a link between BT switches (trim rearrangement in case of failure or as a normal trim). 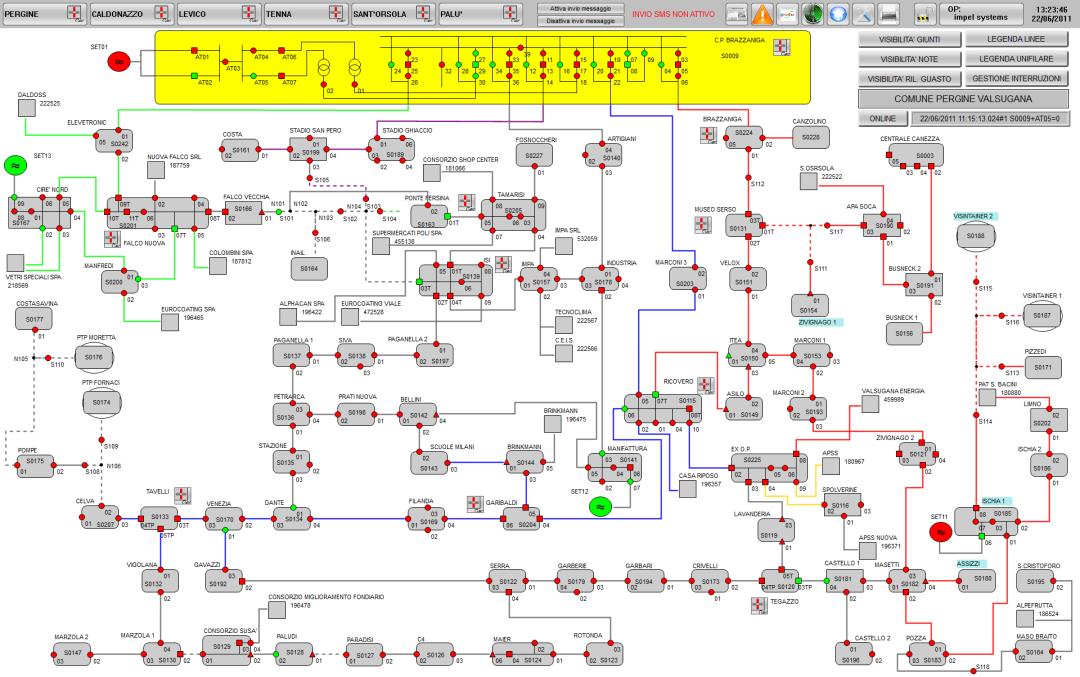 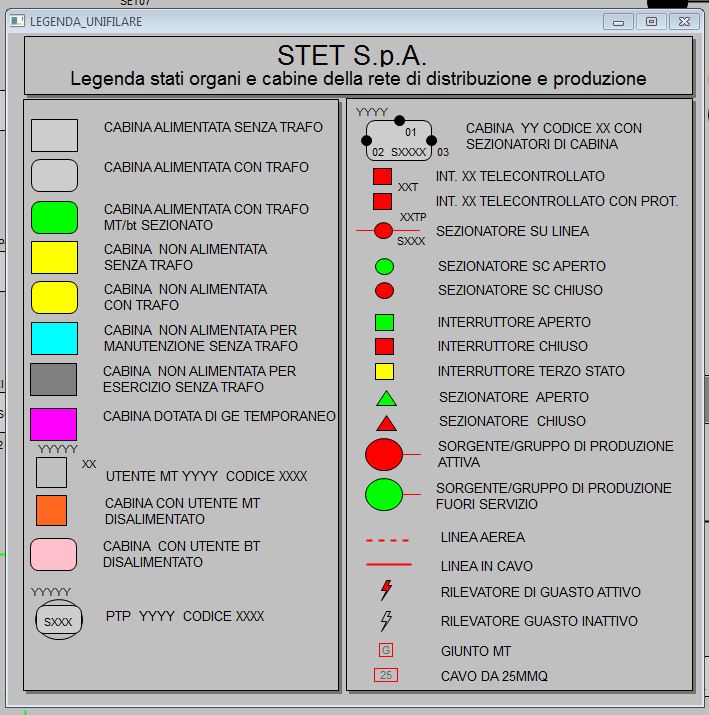 Remote controlled cabins via IEC 60870-5-104 have a dedicated page for displaying the current status and cab switches control and recordings of the measurements acquired by the remote PLC. The use of PLCs with IEC 60870-5-104 protocol allows to not miss any reporting in the event of a failure which also involves a lack of communication to the telecontrol center. 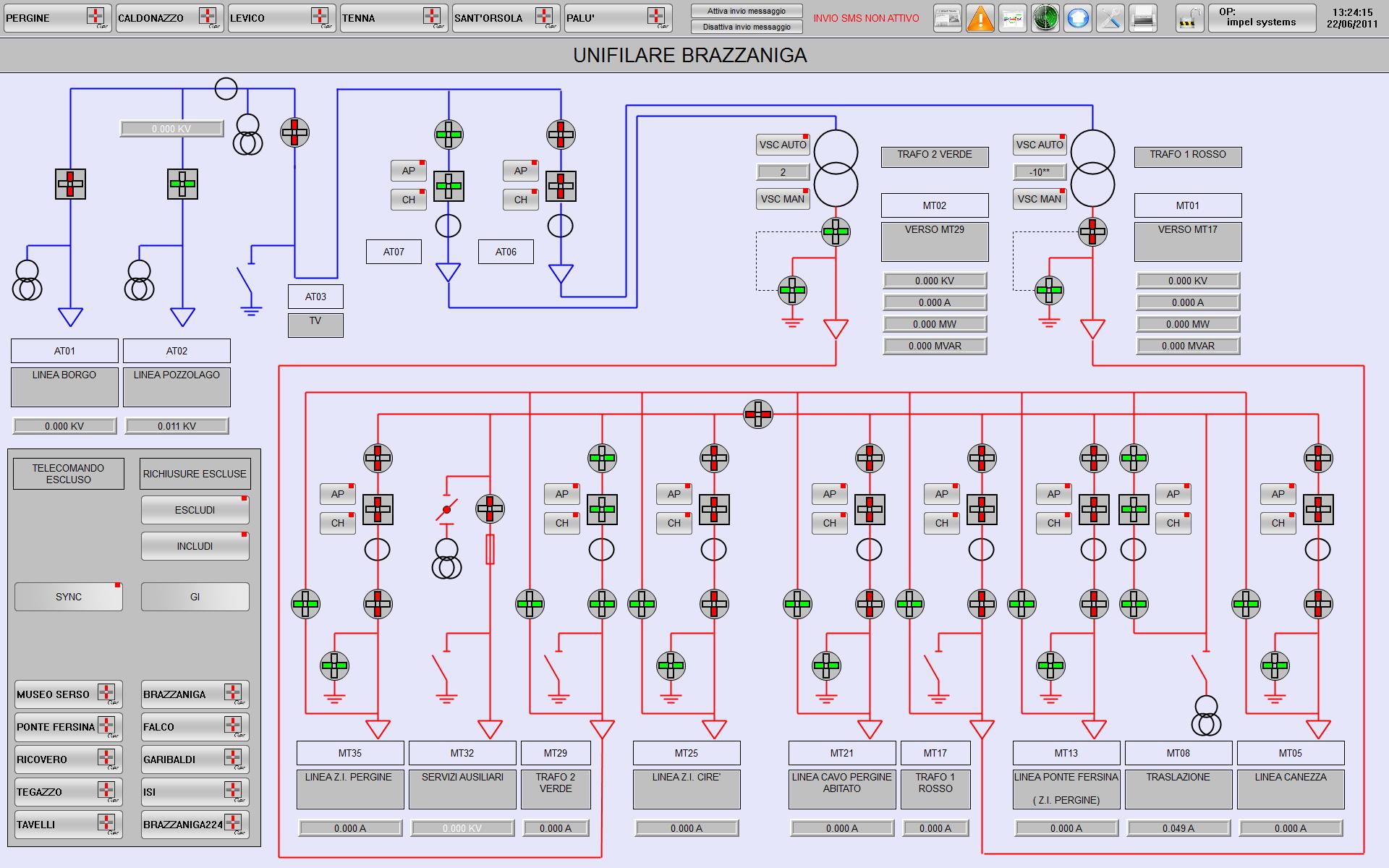 The presence of unmonitored switching devices necessarily requires an interaction of the operator with the system to update the actual state of the network; for this purpose pop-ups have been created that allow the opening and closing of MV disconnectors and LV switches, which can also be made retrofitted, as required by the dictates outlined by the Electricity Authority.

At the same time, the operator may make constraints in the calculation of power outages for some unpowered cabins for commercial needs (seasonal users) or for maintenance purposes, or may put in temporary spots (generating sets) at appropriate points in the network to limit out of services or for maintenance purposes.
Everything is done with ad hoc masks and the result is a color-type animation in the cabs affected by the operation.

When maintenance is completed or the power is restored to all utilities after a failure, the operating personnel can perform the analysis of the power outages.
The system then analyzes network states and proposes the collation solutions according to the criteria provided by the Electricity Authority

The operator can then confirm the modifications proposed or modify them, allowing maximum flexibility in the grouping of the interruptions. The system automatically considers the municipality associated with each LV switch so as to divide the interruptions in case the affected cab involves consumers different municipalities.

Creating an interruption generates a list of excluded (POD) excel files in Excel format using the "Extract Pod" button.
The system allows to update the list of PODs associated with each location (each location is linked to a LV switch) periodically, as required by the Authority.
Subsequently, the operator has a graphical interface available for each interruption that allows to define the logical and practical aspects of an interruption that can not be obtained from the automatically created database such as:

All of these data, along with parameters automatically processed by the system for that interruption, are saved and printed in the interruption report; the template is automatically built and will be completed with the various network configurations during each phase of interruption - executable in off-line mode from the graphical interface - and from any list of alarms of the telecontrol system, filtered temporally for the time span of interest.

Finally, the developed tool can export in excel format all the summary data of the individual interruptions that occurred during the year with the compiled indexes and all the fields required in Table 1 of the document "Technical Instructions for Proper Registration and Documentation of Interruptions Of the electricity distribution service (medium and low voltage networks)"of the Electricity Authority.